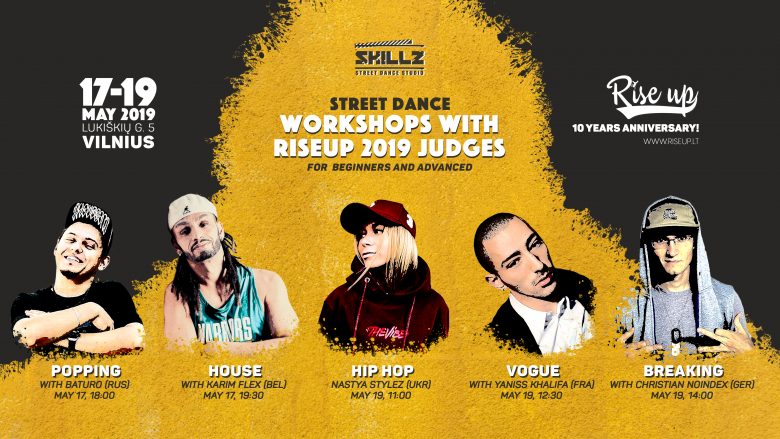 March 25, 2019
UncategorizedComments Off on Street dance workshops with Rise Up 2019 judges

A day before and a day after Rise Up 2019, SKILLZ studio will be hosting Hip Hop, Breaking, Vogue, Popping and House workshops with Rise Up judges. Workshops will take in SKILLZ studio (Lukiškių g. 5, Vilnius)

NASTYA STYLEZ (UA) She is dancing Hip Hop for 11 years, a member of a Mad state crew / Dog’s fam. Also, Nastya is one of the organizers of The Vibe project and Hip Hop Vibe Battle. Represented Ukraine at many events in such countries as Russia, Belarus, France, Italy, USA, Poland, Germany, Czech Republic, Netherlands, Spain, China, Austria, Slovakia, Portugal,Thailand.

The most important achievements for the last few years:

CHRISTIAN NOINDEX (GER) is a member of the crew Break2Beat – Epiphany in Pandemonium, which he founded in 2007. He also represents Jimakeno crew, since 2015. He is an all-rounder with an individual and unorthodox style. But you can still see that he has traditional breaking foundation. In 2016, he had his first appearances on international stages qualifying through among hundreds of dancers for the battles at Outbreak (SLO) and Battle Of Honor (BEL). A year before he released his documentary “Noindex Rhythm Exodus” that inspired a lot of Bboys from all around the world.

KARIM BELHARCH  (BEL)  He started his career in the 90’s, in the neighbourhoods and station of Brussels. He is an emblematic figure of the Belgian Hiphop movement and is considered as a true pioneer of House Dance in Belgium. Known as Karim Flex, he still represents his country on the international scenes in competitions, Battles, Workshops or as judge at events in Belgium and abroad.

In 2014, he founded “UP ZONE”, training project and dance school;

In 2016, he created and organised the very first Festival dedicated to the new generation “I AM NEW FEET”

YANISS KHALIFA (FRA) In 2014, Yanou was adopted by Mother Lasseindra Ninja as a member of the Iconic House of Ninja and since then he participates in balls and wins trophies in such cities as Paris, Amsterdam, Milan, Stockholm, Miami, London, Düsseldorf, Berlin and more.

Yanou Ninja creates choreographies, judges and teaches. Yanou is involved in different projects in Europe and works with different dance companies in France: Cie Nomad (Popping), Cie Uzumaki (Bboying), Minuit 15 (his hip hop crew) and most recent – the National Opera. Yanou’s Old Way is his signature style and influences all of his performances.

ANDREY BATURO (RUS) – one of the best popping dancers from Russia. He has extremely big amount of knowledge to share. He learned from best dancers and OG’s from USA, China, Korea, France etc. Battled all around the globe on such events like “KOD”, “Juste Debout”, “Summer Dance Forever”, “Funkin stylez”, “Respect my talent” and many more. He is absolutely unique dancer with unique style and big teaching experience as well.